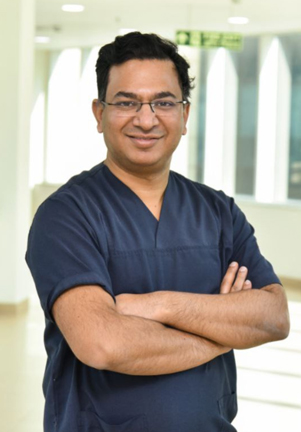 Center For Spine And Scoliosis is headed by visionary Dr. Hitesh Garg, a well renowned spine surgeon in Guragon and Delhi NCR region. He is supported by a complete team of physiotherapists, orthotists, physicians, neurologist, radiologists, neurosurgeons and anaesthetists in providing a complete cure to all the conditions affecting the spine and spinal cord. We believe in treating the spine ailments conservatively unless the surgery is absolute necessity.

Born in a small town in the state of Punjab, Dr. Hitesh Garg graduated from India’s best medical college, All India Institute of Medical Sciences (AIIMS) before joining KEM College, Mumbai to specialize in Orthopaedic surgery. His special interest in spine surgery took him to USA for doing clinical fellowship in spine surgery from Yale University. He followed it up with a fellowship in pediatric spine surgery from Shriners hospitals for children where he performed some of the most complex deformity correction procedures. He has also done a fellowship in joint replacement from AIIMS, New Delhi.

Dr. Hitesh Garg has impeccable academic credentials from the best medical institutions around the world. He has strong academic interest, has published nationally and internationally and has written chapters in world renowned books on spine surgery. He has travelled widely and has presented papers at national and international conferences. He was offered a faculty position in spine surgery in USA, but he chose to come back to India with the aim of building a world class comprehensive spine center in this part of the world. Before joining Artemis Health Institute, Dr. Garg spent 8 years practicing his skills as a spine surgeon at the top most renowned institutes in USA and India. Dr. Garg believes in meeting patients’ individual needs through evaluation and treatment designed to help them achieve active, pain-free lifestyles. He combines leading edge techniques with proven traditional methods to provide patients with the best care possible.