Spine surgery is traditionally done as "open surgery." This means that the area being operated on is opened with a long incision to allow the surgeon to view and access the anatomy. In recent years, however, technological advances have allowed more back and neck conditions to be treated with a minimally invasive surgical technique.

Because minimally invasive spine surgery (MISS), does not involve a long incision, it avoids significant damage to the muscles surrounding the spine. Typically, this results in less pain after surgery and a faster recovery. 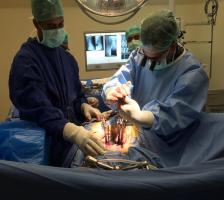 The indications for minimally invasive spine surgery are the same as those for traditional open surgery. Spine surgery is usually recommended only when a period of nonsurgical treatment — such as medications and physical therapy — has not relieved the painful symptoms caused by your back problem. In addition, surgery is only considered if your doctor can pinpoint the exact source of your pain, such as a herniated disk or spinal stenosis..

Decompression relieves pressure on spinal nerves by removing portions of bone or a herniated disk. Spinal fusion corrects problems with the small bones of the spine (vertebrae). The basic idea is to fuse together the painful vertebrae so that they heal into a single solid bone.

One of the major drawbacks of open surgery is that the pulling or "retraction" of the muscle can damage both the muscle and the surrounding soft tissue. Although the goal of muscle retraction is to help the surgeon see the problem area, it typically affects more anatomy than the surgeon requires. As a result, there is greater potential for muscle injury, and patients may have pain after surgery that is different from the back pain felt before surgery. This can lead to a lengthier recovery period. The larger incision and damage to soft tissues may also increase both blood loss and the risk for infection.

Minimally invasive spine surgery was developed to treat spine problems with less injury to the muscles and other normal structures in the spine. It also helps the surgeon to see only the location where the problem exists in the spine. Other advantages of MISS include smaller incisions, less bleeding, and shorter stays in the hospital.

As opposed to open spine surgery, minimally invasive surgical approaches can be faster, safer and require less recovery time. Because of the reduced trauma to the muscles and soft tissues (compared to open procedures), the potential benefits are:

In addition, some MIS surgeries are performed as outpatient procedures and utilize only local anesthesia — so there is less risk for an adverse reaction to general anesthesia.

As with any surgical procedure, no matter how minimal, there are certain risks associated that include, but are not limited to:

And, though uncommon, there is always a small chance that the initial MIS surgery cannot be completed, requiring either a second procedure or full open surgery.

How long does it take to recover from minimally invasive back surgery?